Talking of things from the past unexpectedly surfacing: here’s a newspaper cutting which I saved in 1985. (Good grief, that’s 25 years ago! Ahem . . . ) I mislaid it for a while, and then was delighted to find it again a few months ago.

It dates from my time living in Bangor, North Wales, and is a letter to the local free newspaper. There was an election coming up. Bilingual leaflets were produced by the parties, in English and Welsh. Well sort of. Here is one resident’s reaction to what came through the letterbox: 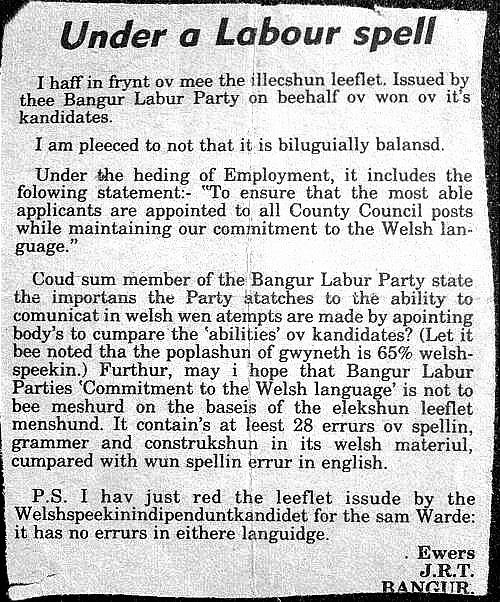 By the way, some of the spellings in the above make more sense if you’re familiar with the basics of Welsh pronunciation and with the Gwynedd local accent: for example, ffrynt in the first sentence is an almost perfect representation in Welsh spelling of how the English word front would be pronounced locally.

Now the question in my mind is: how bad are the translations in today’s election campaigns? Have they improved at all? My hope is that they have, but I wouldn’t be too surprised to hear that they haven’t.

We’ve all heard stories of bizarre sentences resulting from, say, translating a piece of English into Russian and back again. I’m never sure whether these are true, apocryphal or embellished.

Well, yesterday I came across a website called Translation Party whose function is simply to generate these. It doesn’t translate things into Russian: you provide a piece of text, and it then repeatedly translates it into Japanese and back again until it achieves “equilibrium”. That is, it stops when translating the English text it has arrived at into Japanese and back no longer changes the text. I think it uses Google Translate or some such thing.

Here, for example, is the chain of English “sentences” resulting from typing in “shall I compare thee to a summer’s day?”:

Don’t ask me where 2006 came from (as I don’t speak Japanese, and therefore have no idea.)

Interestingly, if I make the tiny correction of capitalising the beginning of the starting sentence, 2006 doesn’t get mentioned at all and the site arrives at

I have a horrible feeling that in not many years’ time that may well be standard English grammar.

Each time you enter some text, the website creates a link to the resulting page. Thus if you want to see the steps which led from this tweet from one of my Twitter contacts